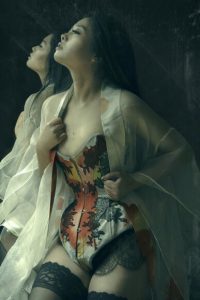 It was the Oxford Conference of Corsetry just over a week ago, and in its run-up I spent most of my time getting pretty obsessive about corsets. I’ve been neglecting other areas of lingerie to dedicate my time to crafting these exquisite, waist-altering garments. Consequently, I’ve spent a lot of time thinking about the significance of the corset. As a lingerie designer, corsets to me have always existed in their own category outside the rest of lingerie. Generally speaking, I consider them to be their own category of clothing, and more of a piece of outerwear than exclusively underwear.

For the majority of their history, corsets have been almost exclusively an undergarment. It was during their heyday in the Victorian and Edwardian eras that they made the transformation from a purely functional pieces of clothing to a beautiful pieces of lingerie. The introduction of luxurious silk fabrics and dainty lace trims meant many corsets became elegant components of trousseaus or decadent boudoir accompaniments, a new incarnation for these previously staid garments. Yet in the latter half of the 20th century, heavy foundation wear fell almost entirely out of favour. It wasn’t until around the 1980s that corsets saw a major resurgence (and one that we can largely attribute to Jean Paul Gaultier’s corseted costumes for Madonna); corsets stopped solely being hidden under clothing. 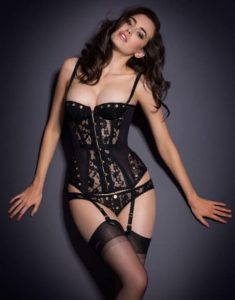 There’s no doubt that corsets have become somewhat of a staple for many modern lingerie brands; however, for many of these labels, it can certainly be debated whether or not these garments actually count as ‘proper’ corsets. Many of these pieces are lightly boned with plastic and without much curve cut into the patterns: they will not offer any real form or shaping and cannot really be referred to as foundation wear. Arguably in these instances, the difference between corsets and basques and bustiers has become somewhat blurred. It’s very rare to see actual shapely corsets being sold alongside lingerie (with the exception of certain vintage-inspired brands such as What Katie Did and Kiss Me Deadly). Curvy corsets and ‘waist-training’ have certainly seen a resurgence in recent years, though there’s certainly been a shift in the number of retailers that actually market these corsets as pieces of underwear.

Many corsets are now being designed exclusively as outerwear pieces, whether these be additional accessories to casual wear (as brands like Orchard Corset and other lower-priced OTR labels seem to target) or evening and bridal wear. These pieces still often give a nod to lingerie though: many OTR styles include loops for suspender attachments as standard. In addition to this, it must be noted that the boundaries between lingerie and outerwear are becoming more and more blurred, corsets non-withstanding: consider the number of lingerie brands that create bras with extravagant necklines and harness attachments. 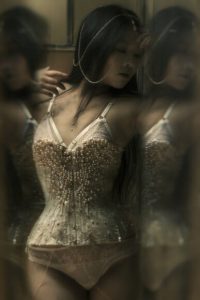 Of course there will always be corsets that are created specifically as lingerie, whether that be historical reproductions or modern interpretations of girdles. Nevertheless, the area of corsetry that most interests me and that I aspire to as a designer most is one that will never remain in the world of lingerie: couture. Whether it be Mr Pearl’s impeccable creations on the Parisian catwalks or Sparklewren’s lace and Swarovski encrusted delights, these are pieces that should be criminal to cover up with clothing. It’s the side of the industry that is totally uncommercial that interests me most: the area where creativity can take wing most. Costings and mass production aren’t considerations for pieces like these; I suspect this is where my personal disconnect between corsets and lingerie originates.

There’s no ‘correct’ answer for corsetry’s position in the lingerie world. A number of prominent figures in the corsetry community were asked for their thoughts on the matter. The variety of opinion certainly offers some food for thought! (Special thank you to Cathy Hay for asking Mr Pearl’s thoughts on the matter!) 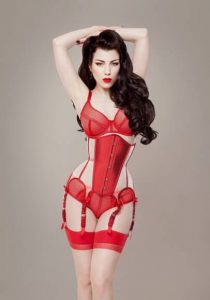 Mr Pearl: Corsets are objects in their own right, whether lingerie or showpiece. They’re connected to shoes, hat and gloves…. They exist in their own world. They are not fashion, they are beyond fashion. They can be in or out of fashion. Once they were required but that time will never return…. But imagine the waists you’d see! Lingerie is something very private, to be shared in private. Corsetry should be shared wherever possible.